Faith in Times of Moral Crisis 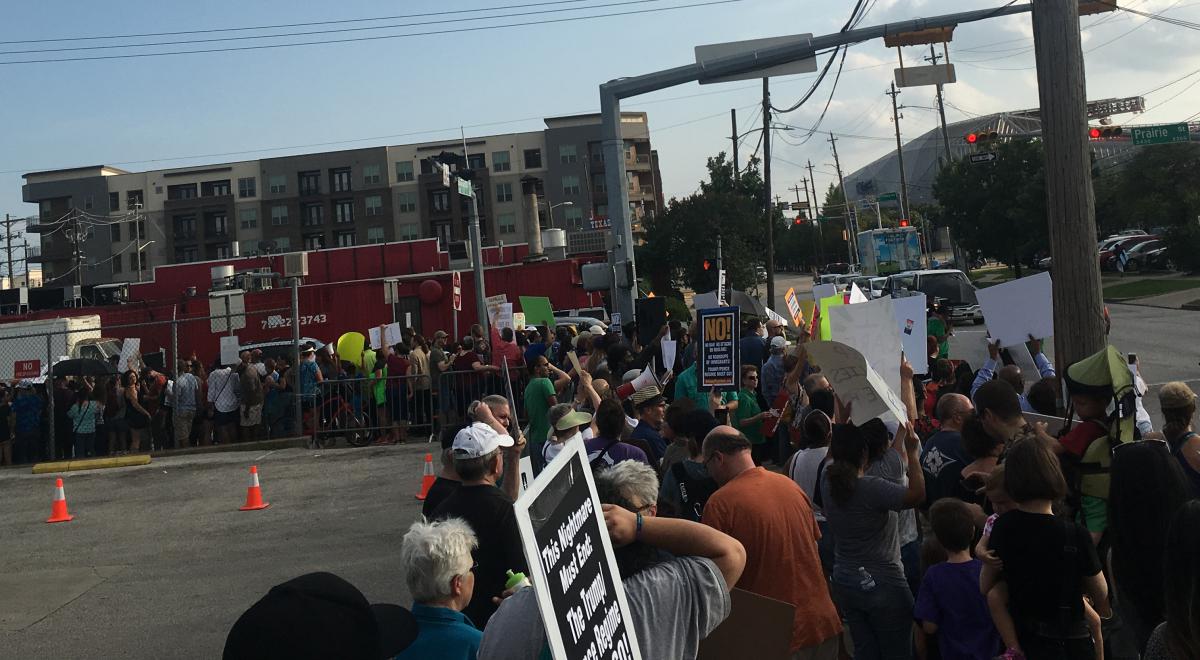 Rev. John Edgerton traveled to Houston, Texas to bring attention to a proposed immigrant detention center. Below he details his experience.

This past week I traveled to Houston, Texas to help launch a round-the-clock prayer vigil at a proposed detention center for immigrants arrested at the border. Through friends of mine in the faith community in Houston, I learned that the Department of Homeland Security was seeking to convert a warehouse into a new detention center to detain families and children. As it stands, the administration has not put together a comprehensive plan for reuniting children with their parents. In response, the faith community quickly pulled together and launched a prayerful presence at the site to communicate to local, state, and federal leaders that they do not support expanding infrastructure for jailing children.

But why take this action? Why go to Houston?

I went there, first, because I was invited. My friend asked for help in filling up the first 48 hours of the vigil, in the hopes that once the word got out, the vigil could sustain itself. The photo included with this blog was taken at a rally. Clearly, the word got out.

I went down to Texas on very short notice to help, because the faith community asked me to go. It is nothing more or less than what I would hope that the wider faith community would do should Boston ever need similar help.

I also went to Texas because I believe that this is a winnable fight. In talking with local organizers and activists, I learned a few things. The owner of the warehouse under consideration for use as a detention center is a man with a good deal of ongoing business interests in the city of Houston. This means that he is susceptible to political pressure by elected officials who have the power to deny or slow down approvals for future endeavors.

While this is fundamentally a question of federal policy, local organizing can make a big difference. There have been large rallies at the site, as well as the round-the-clock prayer vigil, all of which were covered by local media. It is no surprise that, as of today, the mayor of Houston has publicly opposed opening a detention center in that warehouse, the chief of police is also opposed, as are state senators and reps. The owner of this warehouse will likely decide that however much money he would make leasing his facility to Homeland Security, the money will pale in comparison to what he would lose by making an enemy of local political powers.

I take from this two lessons. One, local organizing matters. Two, activating our allies is more effective than trying to debate with those working against us. If there are people who agree with family separation or family detention, it is not necessary to convince them to change their minds by means of our moral witness. Their actions are what need to change, because their actions are what will hurt people. Instead of engaging in debate with those in favor of morally heinous policies, we should instead convince our allies of the rightness of our moral witness. We can then use that shared power to thwart the designs of those who are hurting the vulnerable.

I also believe the fight over this warehouse is part of a strategy that could potentially force the end of family separation and family detention. In order for the administration’s policy of family separation or family detention to continue, they will need to massively expand their capacity to jail people. If they cannot build infrastructure for detention, then when they arrest a family at the border they simply will not be able to detain them. The so-called “zero tolerance” policy can only continue if the administration expands its infrastructure of detention. In recent days, the President has stated on Twitter that we ought to simply begin denying due process to those arrested at the border. It is not clear what he means by that, and we are grateful for legal watchdogs who will exert pressure through the courts to resist any sweeping changes to the rule of law. The law is clear that all persons, including foreigners, are entitled to due process. It is very possible that the administration will go back to fitting people arrested at the border with ankle bracelets and assigning them a parole officers. This is not a perfect system, but it is humane and it respects the rights of due process.

I also must include a bit of reflection about where we find ourselves as a nation. Our country is in a state of moral crisis. This crisis unfolded in recent weeks as bipartisan furor grew over the Presidential administration’s family separation policy. Our nation was playing out once again some of the vilest chapters of our history. For centuries we sold children into slavery, sometimes splitting apart families, sometimes enslaving them together, depending on the economic needs of the time. Our nation also forced Native American children to live in institutionalized settings in an attempt to snuff out their culture. Japanese children were jailed in internment camps, having their families and their lives upended and their rights ignored because of their nationality.

In each of these chapters of our history, racism was the justification for unjustifiable actions. Treating an entire race of people as subhuman leads to terrible human rights abuses, even of children. In retrospect, it is obvious that these sorts of policies are vile and wrong. But at the time, many Americans felt they were justified.

It is sobering to find ourselves standing in the midst of creating history. In the decades to come, the way we are treating immigrants will be counted alongside our nation’s most shameful chapters. The events of the past eight weeks highlight once again the way that racism is used again and again in our history to justify the unjustifiable. Immigrants and asylum seekers are spoken about as subhuman in the highest halls of power in our country. Human rights abuses, even of children, are playing out before our eyes.It is all so terribly familiar.

But we are not without power to stand against it.