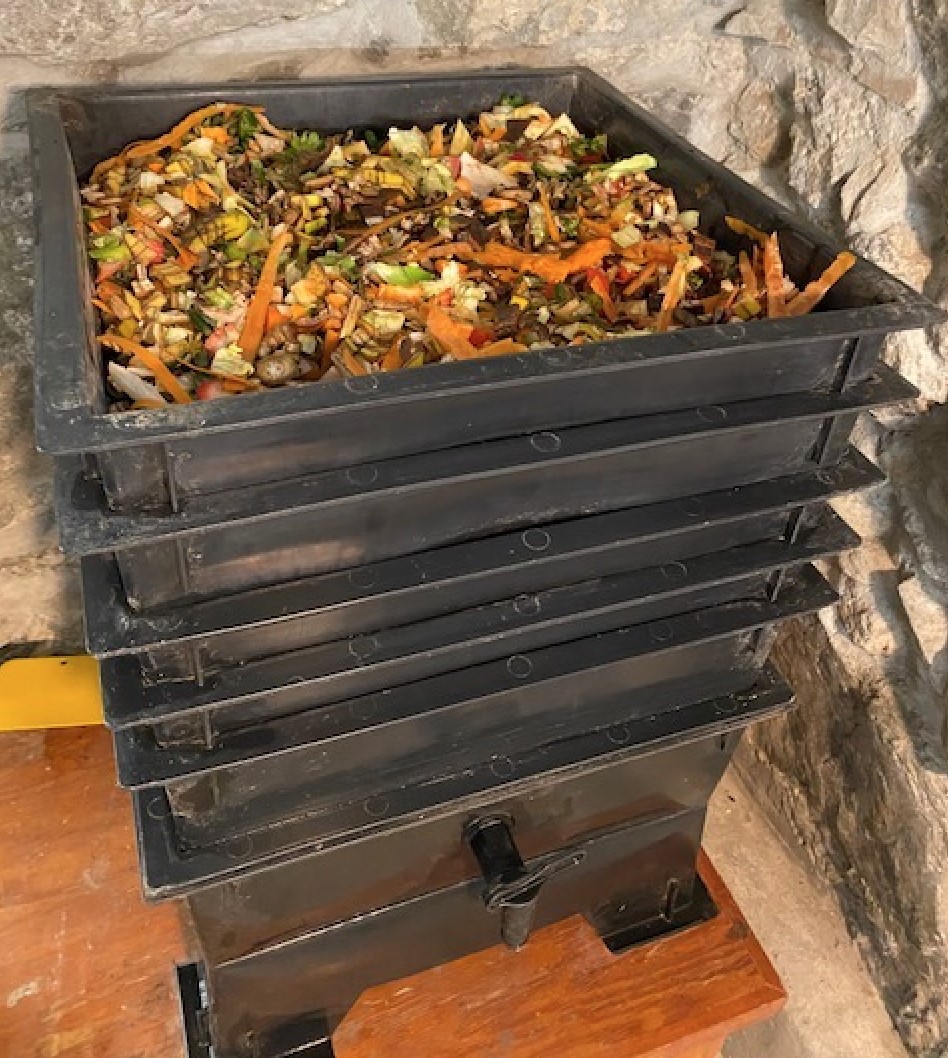 About 12 years ago, Joel’s office started using an in-office composting bin system, The Worm Factory®, to convert some of their food scraps into compost rather than throwing them in the trash or down the garbage disposal. It was such an easy-to-use, odor-free system that we decided to set one up in our home and have been using it ever since.

WHAT IS WORM COMPOSTING?

“Worm composting is using worms to recycle food scraps and other organic material into a valuable soil amendment called vermicompost, or worm compost.”

The ‘Resources’ section at the end has a few links to help you get started in exploring if composting is right for you.

The Worm Factory® comes with multiple stackable, mesh-bottom trays. To start, food scraps and bedding are placed in the lower tray. Once the tray fills up with composted matter, another stackable tray is placed on top of it and food scraps and bedding are added to it. Because of the mesh bottom, the worms can migrate up to the food in the next tray without any work from us.

The bin should be kept in a cool, dry place. We keep ours on a table in our basement.

Red Wigglers are the recommended worms to use for composting. Once ours arrived in the mail, we added them to the bin and have not needed to order more since our initial purchase.

Food scraps can include fruits, vegetables and coffee grounds. We don’t include starches, but most sites say they can be used sparingly. Foods to avoid are meat, poultry, fish, bones, dairy, oils and fats.

When we generate appropriate food scraps, we chop them up and keep them in a container in our refrigerator until feeding day.

The key to the paper bedding is that it be soft and light in order to provide a good environment for the process to work. We use shredded newspaper but shredded cardboard or other non-plastic paper could be used instead.

Instructions for setting up the initial bedding will be specific to the system you choose.

Having an ongoing food scrap container in our refrigerator allows us to feed the worms about once every 7 - 10 days. The worms could be fed more frequently than that.

We add the food scraps and shredded paper to the top tray, cover it all with a piece of newspaper, put the cover lid back on top and we’re done, almost. There is the ‘worm tea’ to retrieve too.

The Worm Factory® has a spigot on its bottom level. Using a recycled spaghetti sauce bottle, we collect the liquid via the spigot and then pour it on the soil around our outdoor plants.

Depending on the system you use, when and how to harvest the compost will vary. For us, it is usually once every few months. Signs that it is ready are that the compost is nearly black and in small chunks. We just remove the bottom tray, dump the compost in our garden and then rinse the tray out with a hose. The tray is now ready to add to the top of the stack when we need it.

Once you start searching on vermiculture and worm composting, you will find many sites, articles, and even education plans. Below are some links to help get you started.