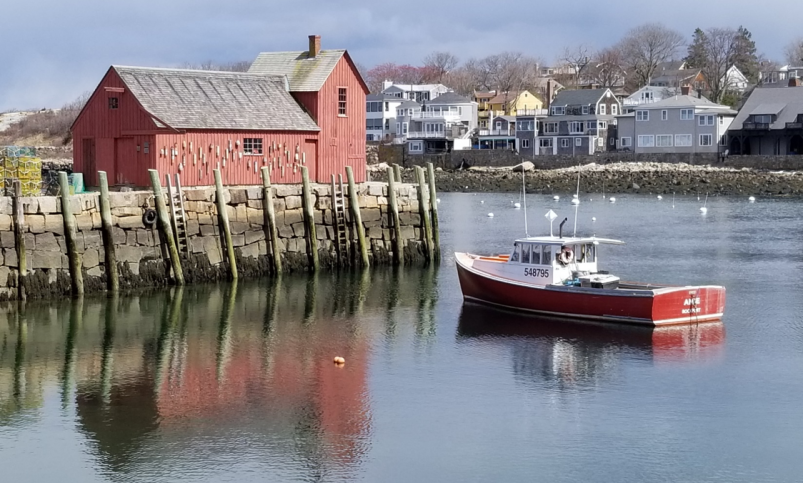 In the harbor of Rockport Massachusetts on Bradley Wharf stands a little red fishing shack. There isn’t much to it, a small two story section at the end of the wharf attached to a shorter addition heading towards Bearskin Neck. This quaint little building stands at the entrance to the inner harbor that is home to the remaining lobstering and fishing boats in town.

The shack was built around 1844 to store fishing material and nets. Before the advent of steamships, Rockport served as a summer stop for the US naval fleet and people would meet by the shack to catch the launch out to tour the battleships in the bay.

It served as fishing storage until artist John Buckley bought the shack for a studio in 1930. Kristen Davies in her book Artists of Cape Ann describes how the shack got its name:

Finally in the early 1930s, while critiquing a group of students’ pictures, several of which featured the little red shack, Lester Hornby, using a term often employed by French students to describe frequently painted sites, exclaimed, “What – Motif No. 1 again!” His fateful words stuck and since then the little red shack has been referred to as “Motif No. 1.”

In 1933 the Rockport Post of the American Legion decided to build a float of the beloved town symbol for a parade at the Chicago World’s Fair. They built the float so that the building was mostly collapsible to get under bridges and other overhanging structures on the dirt roads that then connected most of America. It was a difficult journey and at several places they had to let the air out of the tires on the trailer to get the float there. It was one of the highlights of the American Legion Parade at the Fair and won awards.

During the depression the WPA sent people to draw the plans down to the nail of this tiny structure. The town purchased the shack in 1945. Disaster struck as the Blizzard of 78 destroyed the shack and left only the battered roof sitting on the wharf. The townspeople gathered together and rebuilt their beloved town symbol using the WPA plans and as much of the original timber as possible.

Today this little red shack stands sentinel over rising tides and a growing and changing town. Where Rockport granite was once loaded onto ships and sent out to build cities, fleets of sailboats now bob in the water. Pleasure craft are slowly replacing working boats in the inner harbor and the end of nearby T Wharf now hosts a yacht club. The navy is long gone and the idea to build a huge breakwater and create a massive harbor for the town was abandoned with just a few remaining cut granite stones sticking up out of the water.

The perseverance of this little building teaches me that through all the changes of life we can stand firm on the strong foundation we have in God’s spirit. The seas rise and threaten but we can stand firm knowing that we are loved and protected. And even when the darkest hour comes and our lives come crashing down we know that in the church we have a beloved community of friends and neighbors to help us pick up the pieces and put ourselves back together stronger than ever.

So stand firm on your own Bradley Wharf, between the inner harbor of the church and the outer harbor of the world, knowing God is there. The seas around you will grow rough and perilous at times but the savior that can walk on water gave his life for you. And the spirit filled church will be there to help you after the storms ravage your life.

Just be, knowing that you are loved.

Material for this blog came from: