Pandemic Performances: Reflections from our Organist

Pandemic Performances: Reflections from our Organist
May 14, 2021 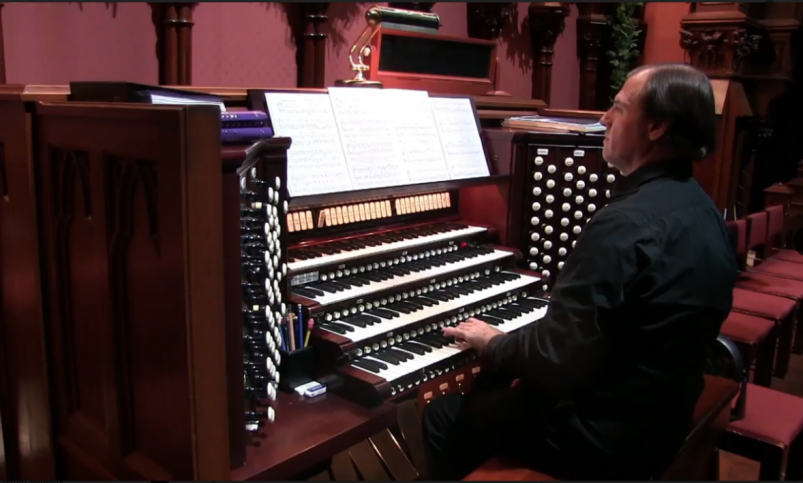 Like many other fields, church music ministry is likely to take hybrid form for the foreseeable future post-pandemic and I anticipate that my repertoire recording project (now numbering around a hundred pieces) will continue even after we are together again.

What a long, exhausting year this has been! Our lives have been upended, the way we worship has changed and continues to do so, and we have been forced to learn to learn new skills in order to adapt our work to a virtual world. Now that there is light at the end of the tunnel, vaccines have arrived, and there is realistic hope that we will be able to resume in-person worship in the not-too-distant future, I thought I might share my own journey with you along with some brief thoughts about what the future might hold.

Prior to the pandemic, my primary means of creating and distributing online content was via YouTube. I have had a channel there since 2010, long before YouTube was assimilated by Google. Many of you are aware that one of my pastimes is storm chasing, and I originally created my channel to share my passion for severe weather with family and friends. Documenting this strange fascination continues to be one of the purposes my channel serves. (As an aside, I will be storm chasing from June 3 through June 18 and will be livestreaming any time I am on a storm!)

Oddly, it wasn't until very late in 2017 that it occurred to me that I could, and should, use the same platform to share my music and not just as a way to indulge a hobby. I started out by uploading preludes, postludes, hymns, and anthems excerpted from recordings of Old South’s services. By the fall of 2019, I found myself increasingly frustrated by the little mistakes I would make that marred otherwise fine renditions of organ and choral repertoire presented in live worship.

After spending a few weeks thinking about alternatives, I tried my hand at recording a half-dozen or so pieces of repertoire outside the context of worship utilizing my own recording equipment and video editing software (originally bought for storm chasing, naturally!) This afforded me the opportunity for multiple takes. Given my complete lack of experience at the time, the results were reasonably good.

Fast forward to March of last year, when COVID-19 arrived and tore across Massachusetts and the nation with a vengeance, Old South and other houses of worship shut down, and we hunkered down in our homes for the better part of six weeks. Thankfully employees of religious institutions were considered essential workers and were allowed to come in to work even though our buildings had to remain closed to the public. Suddenly the skills I had been developing for a private project became an absolute necessity for doing my job!

As it became clear the pandemic would not end any time soon and that worship would be online-only for the foreseeable future, I realized that I would need to quickly produce a library of voluntaries to draw upon. My musical colleagues at Old South came to rely on my video equipment and editing skills for their own contributions to worship (hymns, virtual anthems, etc.) We also faced weekly production deadlines, which are not always easy to meet when one's church is located in the heart of the city. The dreaded wrong note near the end of a piece after ten minutes of perfection was not the only bane of my existence. The inevitable roaring car engines, honking horns, and blaring sirens caused many a recording session to last for hours. Creativity in laying out scores was required to minimize the need for a page turner in an era of masks and social distancing.

The music I was producing for Old South was doing double-duty, as I continued to upload much of it to YouTube as well and slowly began to develop a larger following there. An unanticipated surprise was hearing from several living composers who had discovered my recordings of their music and who wrote to me to express their gratitude not only for how well I had captured the essence of their music, but how much it meant to them that I had taken the time to do so. The feedback was humbling and led to an unexpected realization, that my social media presence had become a ministry, an extension of my calling.

Like many other fields, church music ministry is likely to take hybrid form for the foreseeable future post-pandemic and I anticipate that my repertoire recording project (now numbering around a hundred pieces) will continue even after we are together again. In the meantime, I hope you will continue to enjoy the contributions of Old South’s many and varied musicians to virtual worship. Coming attractions include another organ/cello duet with Sam Ou (already recorded if you want to view it early: https://youtu.be/nxbZPuQgdPU ). Mitchell Crawford and I are also preparing another virtual organ duet, the only way Old South’s two organs can ever make music together!

A version of this article appeared in the February edition of Pipings, the newsletter of the Boston Chapter of the American Guild of Organists.