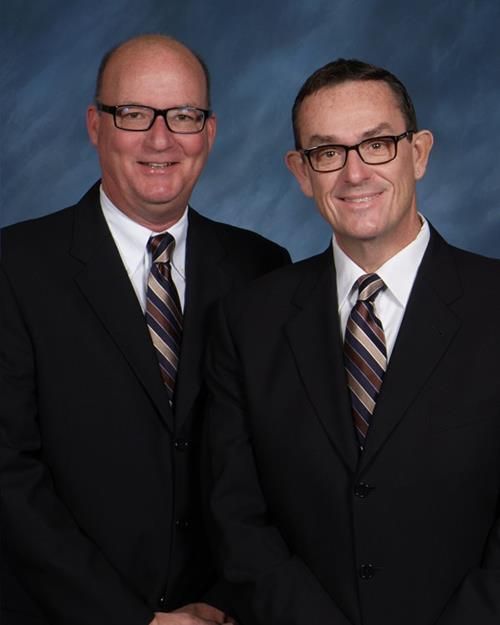 South End residents Richard Spada and Bob Childers became members of Old South Church nearly 9 years ago when they moved to Boston from the San Francisco Bay area. Richard is Sr. Global Manager for Diversity and Inclusion at Novartis, which means he travels — a lot — and makes many presentations to people all around the world. Bob is a clinical social worker with MGH and works at its Back Bay Clinic right here on Commonwealth Street as well as at Elliott Community Health Center in Lynn. What this means is that when Richard is traveling, Bob is managing their home and caring for their beloved Beagle, Cash. Richard and Bob worked together on writing out their story of finding a church home at Old South, and Richard told that story at a recent festival worship.
----------------------------------------------------------
TRANSCRIPT:

We were both raised Catholic. And, our spiritual and religious backgrounds were very much influenced by our devout Catholic grandmothers.

In 1987 we met and, within three months we were living together in the Carroll Gardens section of Brooklyn, a very Italian neighborhood (visualize the Sopranos).

Throughout the year that we lived in Brooklyn, we would watch from our apartment window as there were colorful, Catholic religious celebrations in the neighborhood – with parades celebrating the saints, people carrying statues of the saints, others falling to their knees, and, others pinning money onto the statues. While we really liked this, we never felt included. We always looked onto these parades, etc. from our apartment and never joined in. You see, being gay – and in a gay relationship was, and is now, still not welcomed in the church. That hurt and it continues to hurt.

The following year we moved to California and settled into the San Francisco Bay Area. We dabbled in churches but never really connected with any one community.

A few years after we arrived in SF, I learned that my grandmother, Santina, was diagnosed with cancer. It hit me really hard. I loved her very much and took the news very difficult.

Looking for a space to pray, reflect, be comforted, I was drawn to the Catholic Church in our neighborhood. However, that same week, the Archbishop of San Francisco issued an edict that kicked out and prohibited all gay organizations, including Dignity, from meeting on any church property. I remember feeling angry, feeling alone and not welcomed.

So, rather than sitting with and harboring these feelings, I got up and left and went to a church a couple of blocks away. The Metropolitan Community Church of San Francisco. There, I realized, I was welcomed and affirmed. I was made to feel that I was a loving child of God, not a sinner doomed for hell. We eventually became members and were with MCC SF for many years.

During our time there, Grandma Spada died. It was really tough on me. She was a lovely lady. She epitomized love, inclusion and compassion for everyone. She fit the stereotypes of the Italian grandmother – short (4’10”, stocky, always wore an apron, was a great cook, and wore Estee Lauder Youth Dew Cologne 24 hours a day!)

Her table was always set, there was always enough food for whomever showed up, and everyone was welcomed. In our case, even Bob!

One of the things I remember the most about her is how on Christmas day, she and my grandfather would show up to our house with money envelopes for each of her grandchildren and my mom and dad. As children, each year we each got a crisp $20 bill every Christmas. And, when you got older and got married, you got a $50.

Near the end of her life, Bob and I were visiting her in the nursing home at Christmas time. She told me she had something for us. She took out an envelope addressed to me and Bob. In it was a crisp $50 bill. It was a big recognition of her love for me and for us.

So, it was quite humbling that we were both asked to be pall bearers at her funeral. It was a high mass. Communion was served. It was served for all but not for me or Bob. You see, printed on the back of the bulletin were all of the conditions one must have met in order to be welcomed at the table.

It was so painful. To be in a space celebrating the life of one of the most loving and inclusive people I have ever known, and, to be told we were not welcome at the table, was just awful.

Because of these experiences, we have vowed that whatever church and religious and spiritual community that we are a part of has to be welcoming and radically inclusive.

We moved to Boston in 2008. As we left, we asked our pastor to recommend some churches for us that she considered to be progressive, radically inclusive, welcoming and open and affirming. She immediately said Old South Church.

We remember, quite well, the first Sunday we came to Old South. Coming around the corner to Copley Square, I recall seeing the Tower and hearing the bell calling us to worship. I said, oh my – that is one big BIG church! And, thoughts of real formality, Boston Brahmans, coldness and exclusion came over me. I remember being a bit hesitant about entering.

In the first six months of our arrival and before we decided to join, we were witness to:

Old South Church also espouses other values and behaves in ways which are very near and dear to us, such as:

In a troubled world where it is hard to be ourselves these days, to feel good about our direction as a community, as a society…. this is so very welcomed!

We give today to Old South Church because it is important, today. And, we will continue to give as we go into the future. We don't have children, but, we give so that you and your children, and hopefully their children will always have this place to call home. A place that truly embodies the belief that we are all made in the image of god.